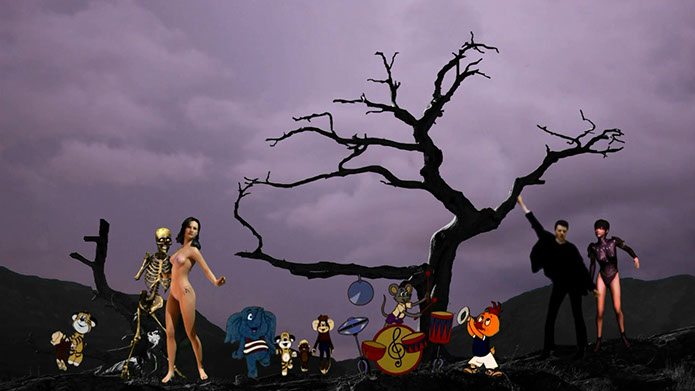 S. Freud has defined two theories for human instincts which accept that the human psych is basically vibrating by the "Urge towards life", which is what we call self-preservation instinct and by Libido, which has a tendency towards coherence and unity. Later on, in his work "Beyond the Pleasure Principle" in 1920, he combined the sense of love by adding as a balance the "Urge towards death" or self-destruction urge, the so-called death instinct, which operates to the opposite direction and overturns connections and destroys things.

His work "Dancing with thanatos" has main references on Freud and his theory on urges towards life and death, as well as Beckett’s "The endgame". The purpose of his work is to highlight the paradox which governs the mental life through the instinct urges, by creating dualities between life and death with a sarcastic mood. The video consists of material which was gathered online, the image by realistic figures and by cartoons where they play music and dance while the text is an extract from the work "The endgame" by Beckett, combining it with music and transforming it into a song.