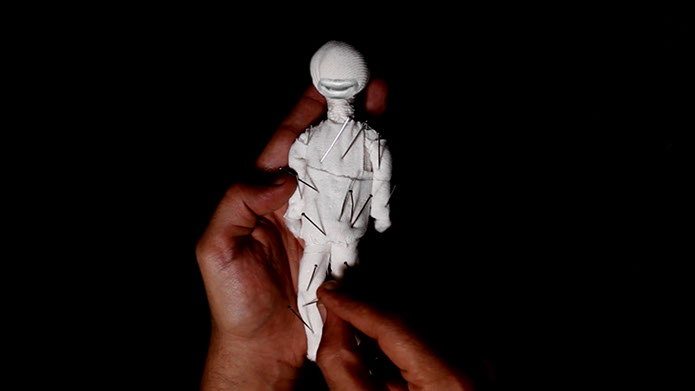 The Nocebo phenomenon which in Latin means (I shall harm) is the opposite of Placebo (I shall please), and it appears when someone aggravates himself his health through negative auto-suggestion, or in other words it is a bad influence created by the belief that something is harmful. For example, taking medicines, dark magic, the evil eye, situations where someone believes that they feel bad because he has taken something or because he believes that someone has done something to him. Yet, the main reason for the cause of the Nocebo phenomenon is the negative mood and the psychology of the person.

The work "The pain of illusion" has the purpose of mocking the phenomenon of auto-suggestion through the beliefs on magic, meaning the ritualistic or mental attempts for the occurrence of an action beyond the physical abilities of the human. The video shows a human effigy which is charged with human senses and there are forces exercised on it.